Story and photography by Sharon Martin

Day One – Chic in Torino

“Would you like dis at da bar or tavolo?”

I felt like a real local on her way to work as I stood at the bar and sipped my cappuccino — the surroundings’ old world elegance and the locals’ chic! But gee that cappuccino was small! I casually ordered another; this brought interesting looks from the barista. I think I just did something not so Italian.

When I asked for the bathroom, I was sent downstairs only to find a huge room with a drain in the middle of the floor. Uhhh… where is the shower head? Suddenly a hip young woman casually exited another stall.

I had waited 14 years to return to Italy. We arrived at the Star Hotel Majestic in Torino after 36 hours without food or sleep. I was struck by the grandeur of the lobby as we passed through the massive wood revolving door. The concierge offered suggestions for restaurants — we opted to go straight to bed.

Since entering the city (and every village thereafter), we were careful not to enter the restricted area in the center of the historic districts. The mere thought brought back memories from a previous drive through London and the hefty fine which followed.

Since dinner reservations were customary, we settled on an indistinct pub with chicken, fries and loud music videos. We
couldn’t find Scottish food in Edinburgh; now we couldn’t find Italian food in Torino.

Day Two – On My Own in Torino

After breakfast, which consisted of a croissant and cappuccino, I walked past beautiful shops, more coffee bars, and the Egyptian Museum. I was just relaxing and enjoying the scenery — only to find myself in the middle of a student demonstration!

There in front of me was the University of Torino. Accompanied by police, the students held signs which read arabic. There had been a terrorist attack in Paris, and we had been there only yesterday! 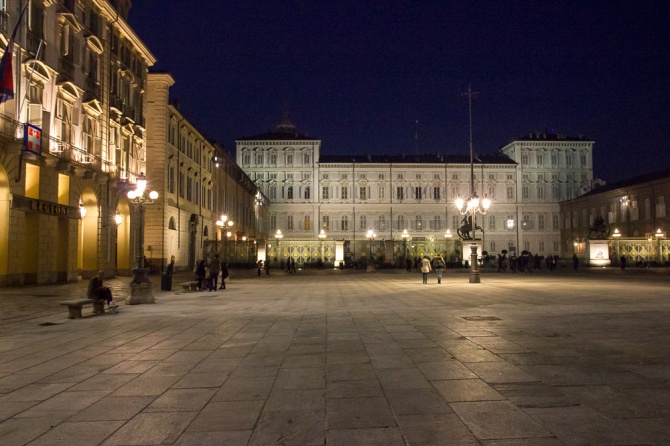 Since we were in Italy in November after the time change, it got dark by 4:50 PM. Over the next 12 days, we became friends with the dark; the quiet stars hung above an indigo canopy and the village lanterns warmed the streets. Alleyways you would never notice during the day became mysterious passages at night!

Torino came alive with planetary strings of lights. On our second night in Torino I walked to several of the famous piazzas, pausing to take photos before heading back to the room.

I assumed the streets were parallel, but they fanned out from the piazzas. My international phone service hadn’t kicked in yet… no GPS. I kept asking for directions from people that didn’t speak much English and kept making wrong turns, getting further and further away from my hotel. Torino is a big city and it was unsettlingly dark.

Finally after a couple hours I decided to ask the shop owners, who were more likely to speak English. I found a kind lady who didn’t speak much English, but left a customer in her shop to help me out. I found a map in my pocket from the hotel and she recognized the piazza. The moral to this story…when in Italy, know which piazza you need to get to.

When I got back to the hotel at 10 PM my son was jealous of the photos I had taken of the lights, so we walked back for night photography. We didn’t get back till midnight; I felt so adventurous!