On our way out of town the next morning, we walked through the arcades past booksellers and a man still dozing on his marble bed. We noticed an espresso bar. The mahogany wood, granite bar and marble floors excited our imaginations; poets and writers had frequented this old world haunt. We pulled up a chair to one of two cafe tables. I ordered only one cappuccino… 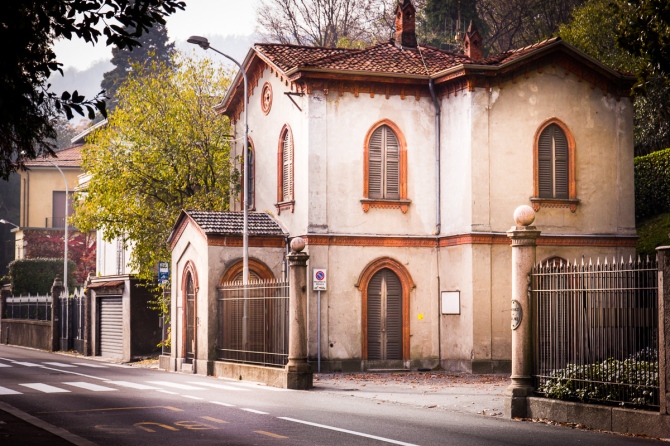 We left the Piedmont region and headed Northeast around Milan to Como; I was ready to exchange city traffic for laid-back Como. We approached town on a two lane road near a 4 way stop and a car sped around us on the our left, barely missing the oncoming traffic. This was not the laid-back experience I had in mind.

We pulled into the hotel Como Metropole Suisse in the city center across the lake; it had hosted kings, princesses and members of the Danish royal family. Established in 1892, the hotel had a dated sophistication. We made our way to a sparsely decorated room with an oversized bath and floor-to-ceiling green tile. I spent several minutes poring over a tray loaded with scented, wrapped soaps, shampoos and towels. 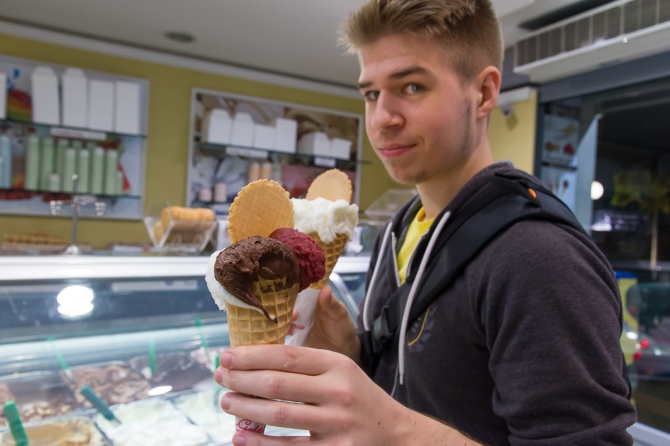 We dragged our regrettably heavy luggage to the parking garage many blocks away; I was happy to relinquish the car for a couple of days. Our salvation was found next to the hotel in a gelateria — a rare sight this time of year.

In the evening we explored the town of Como and happily stumbled on an outdoor market of cheeses, breads, crafts and umbrellas. We stepped inside the cathedral of Como where the locals were having a procession.

After some night photography, we found a restaurant in the village with brick interior, petite string lights, and intimate tables. I had an unforgettable dinner of Risotto with bacon and regional red wine; my son had a huge calzone. 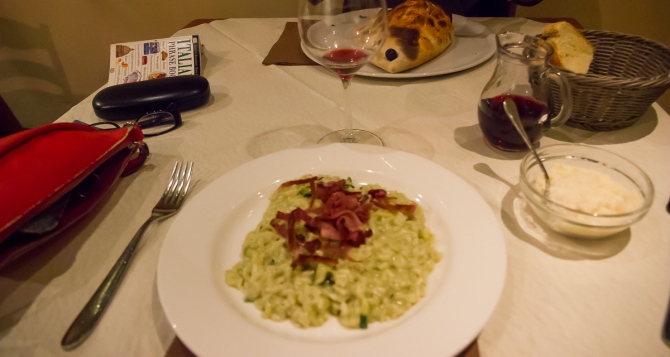 The next morning we had a lazy breakfast in the spacious dining room overlooking Lake Como. The fare was grand by Italian breakfast standards: bacon, eggs, pastries, peaches, lunchmeat, accompanied by peach, apricot, and orange juices, served in silver trays and glass pitchers.

After breakfast, we spent a disappointing morning hiking around Lake Como; it was chilly, overcast and foggy and we could barely see the villas clinging to the sides of the mountains.

In the afternoon we went in search of the funicolare which led to Como Alto, we happened upon an older gentleman, who offered his assistance. With unusual dexterity, he led us up and down the passageways of stairs, conversing as he went. “I was born in this village and have lived here my entire life”, he said. “Most Italians do not leave the village of their birth.”

Finding Our Way by Flashlight

By the time we reached the funicolare, the sun was already obscured behind the mountain. However, from the summit, the sky was blue above thin veils of mist that revealed distant mountains and remote villages. 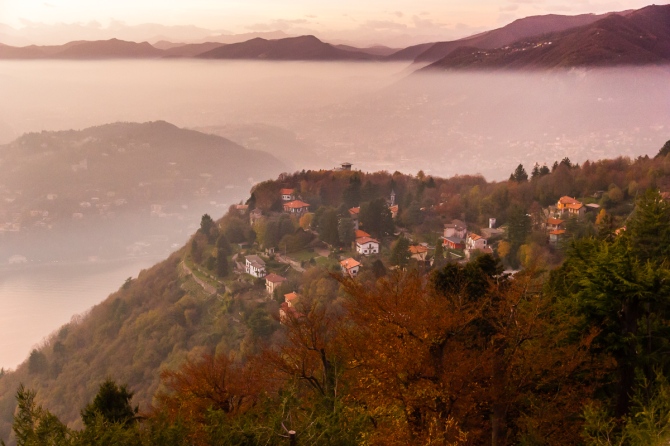 As dusk approached, the outline of Lake Como shined with tiny lights from boats and the surrounding villages.

We ventured into the remote village of Brunate and found Andrew the Apostle –– the village church. The locals obliged us to come in during their evening activities. In Michelangelo fashion, figures floated above our heads and beneath us on a mosaic floor. 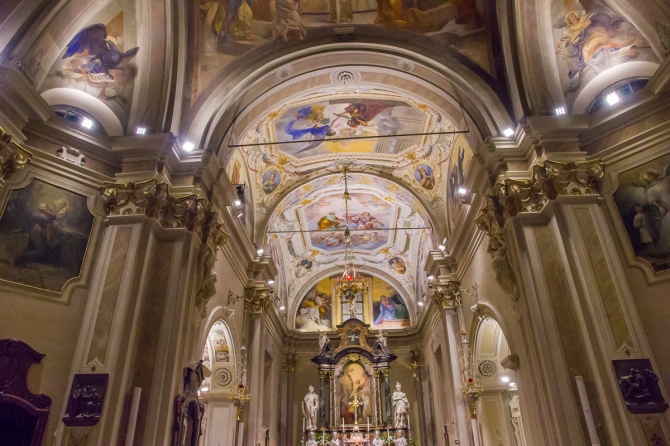 It was long past dusk by now. My son had looked up a well-rated restaurant located at the top of the mountain. He assured me it was only a little further uphill. We began the dark ascent on the single lane road as oncoming cars whizzed pass, pushing us into the rock wall and bushes. Shortly thereafter we ended up on a hiking trail.

By now it was blackest dark. There were no streetlights, no house lights, nothing…

With only an iPhone flashlight, we stumbled along, making out one set of feet at a time. I joked that this misadventure would be one to write about. We pushed forward, tripping on roots. We couldn’t go back. We were lost either way. We had no idea where we were, or where we were going.

Finally, we reached our destination –– an abandoned building. 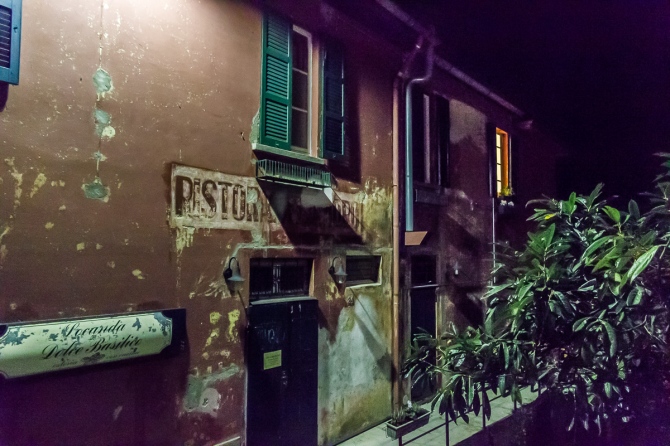